Auto brands are set to battle it out this week at the New York Auto Show. Whose new models will attract the most headlines we’ll have to wait and see. But, of course, for autos marketers, it’s not just about what happens over the next few days. At Unruly, we have been closely tracking which US automakers’ ad campaigns have been generating the most attention and engagement online over the last 12 months.

The result? Ford’s online video ad campaigns are streets ahead, attracting more than half (57.7%) of the total number of shares the auto market has managed over the last year. This is largely due to some huge spikes in sharing activity over the past 12 months, the highest in January due to its highly-successful campaign, “What do you say about the return of a legend?“.

But what’s Ford’s secret? Well, firstly, rather than relying on huge tentpole events such as the Super Bowl or the VMAs, Ford has an always-on video strategy, delivering an almost constant stream of videos all the year round. Ford also mixes up its content, releasing a wide variety of videos: from marketing promotions (e.g. Ford’s Innovate Mobility Challenge Series)  to ads promoting new models.

So what can competitive auto brands do to compete against front-runner Ford? Here are our recommendations:

The bulk of video sharing activity happens between late October through January. Traditionally, this is when brands are launching the majority of their videos to coincide with the launch of new lines.

However, this leads to a more crowded video space, where brands are competing not only with each other, but with the busy Christmas season, where consumers are inundated with marketing messages.

Automakers who want to stand out from the crowd should launch videos outside this busy time frame.

One of the most shared global auto ads comes from Audi, with its “Zachary Quinto vs. Leonard Nimoy: ‘The Challenge’”, which has received 772,920 shares to date. The video was launched in May of 2013, in advance of the Star Trek film’s release, and was able to secure social buzz in the space as it launched outside of the popular Q4 or Q1 timeframes.

2. Focus on metrics that matter

When you compare shares and views for these brands, the numbers show that views are occurring all year long, while brands are only receiving buzz (shares) toward the end of the year (see below).

This means that while brands may purchase online views, they aren’t creating compelling content that makes viewers want to share their videos. Peer-to-peer recommendations of videos have shown an increase in a number of brand metrics, from brand recall, brand association, purchase intent and brand favorability.

If your content doesn’t connect with users, it will not get shared and generate e-word of mouth that can help generate advocacy and extend your video’s lifecycle. 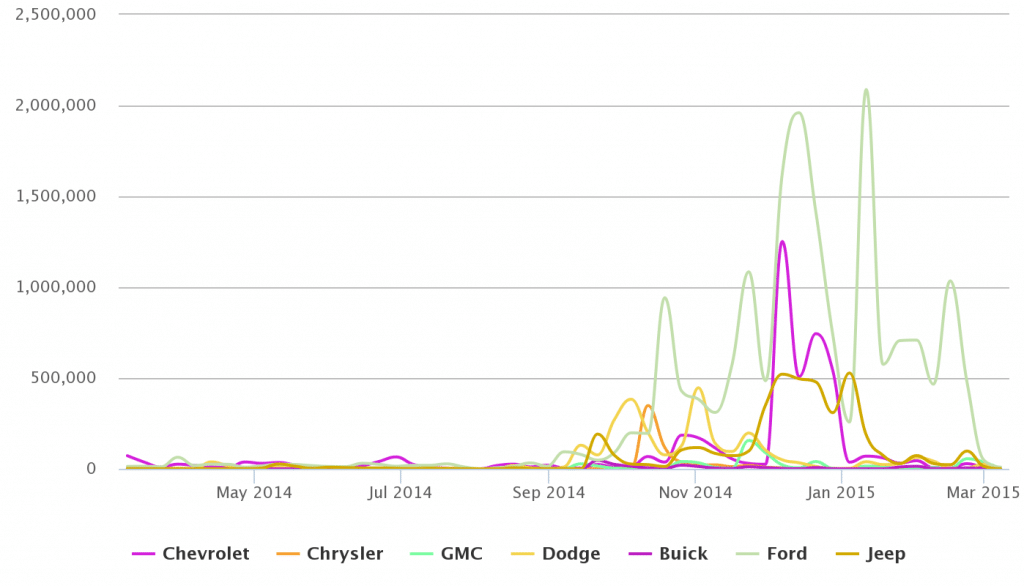 By testing your content you can find the most intensely emotional moments in your video and play up those moments.

To help create more shareable content, we suggest reading one of our Science of Sharing white papers or investing in content evaluation tools like Unruly ShareRank, which can predict a video’s shareability before it’s launched.

One of the main reasons people share videos is because it elicited a strong emotional reaction from them. One of the other key factors that determines video shareability is whether it gives your target audience a reason to share.

For example, someone will share an ad with their social networks if they feel passionately about the topic, they think it will do some social good or they just want to start a conversation.

For the auto industry, people are likely to share your videos with people who are in the market for a car and want to make a recommendation or highlight product features.

No matter when you launch, you’ll want to drive viewers to your web properties. So why not include a dealership locator in your ad to ensure greater engagement with your video?

You also need to include the sharing buttons that are most likely to drive action with your target audience and place social annotations over the content at the most emotional moments with a relevant call to action for the viewer to share the content.