A few days ago we shared our top tips on how to turn your festive ad into a Christmas cracker. But Christmas is the season for giving – and we have five more tips to give.

You have to hand it to L’OCCITANE, the beauty brand created a very pretty ad last Xmas, filled with nice graphics, soothing music and a butterfly.

But I have to be honest, I have no idea what the ad is about and how it relates to L’OCCITANE. Answers on a postcard, please. And I’m not the only one who is confused. Almost a fifth of people who watched this ad reported feeling intensely confused – much more than any other Xmas ad we tested.

Confusion is the most common negative response. It dampens emotions and holds back sharing, but can also have a negative impact on brand metrics such as brand favorability and intent to find out more. Ensure the premise of the ad is clear and that the action is easy to follow. So ensure there is a strong link between brand and content to avoid confusion about the brand’s role or purpose of the ad.

7. Launch on a Wednesday or Thursday

If you want to make sure you ad has the best possible chance to being seen and shared online, we suggest you launch it on a Wednesday or Thursday.

Let me explain. Firstly, on average, half (48.3%) of weekly video shares occur between Wednesday and Friday, with the peak of shares occurring on a Friday and the lowest point being the weekend.

Like YouTube videos, which attract the most shares the day after launch (29.9%), Facebook videos also peak on the second day at 40.6%. It then drops off significantly. It means that when running a video campaign on Facebook’s player or across both Facebook and YouTube, the first two days are absolutely crucial.

But which are the two cumulative days of the week when the most shares of branded videos on YouTube and Facebook occur? Well, as you can see from the chart below, it’s Thursday. So by launching your video campaign on a Thursday you are giving it the best possible chance. But what if you just have a YouTube video? Well, YouTube videos do not suffer quite the same explosive burnout as Facebook ads do.

The shares do no tail off significantly till after the third day. The decrease in sharing activity is also a lot less dramatic, likely due to the fact that YouTube is primarily used as a search engine as opposed to a social network.

So what does that mean? Well, back near the start, to be honest, looking at the three consecutive days where the shares occur – Wednesday to Friday (see below). 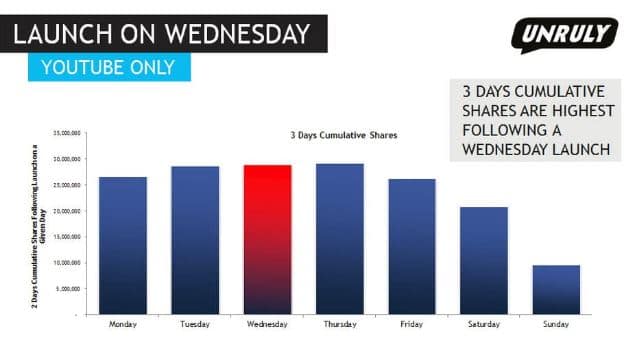 So put very simply, if you are launching a video on Facebook or both Facebook and YouTube, your best possible chance of attracting the most shares is by launching it on a Thursday. If it’s just YouTube, go for Wednesday.

We have already talked in length about the importance of emotions. So what if you could target people who are more likely to have an emotional connection.

Well, one solution (well, it is our blog!) is Unruly Custom Audiences (UCA), which allows advertisers to connect with the consumers most likely to love your ad.  For example, let’s look at Boots’ Christmas campaign “#DiscoverMore”, launched last year.

As you can see from the chart below, the difference in reaction from a Unruly Custom Audience compared with the target audience is quite stark.

By targeting people who are more likely to champion your brand, you will make the most of your media spend. So far campaigns run through UCA emotional targeting have seen brand favourability boosted by 74% and purchase intent up by 80%.

Sure, this is Christmas – but that does not mean it’s wise to follow the stars. Many Christmas ads feature celebrities, such as the one below from Burberry, but very few celebrity ads feature in the top 10 most shared ads.  And it certainly doesn’t guarantee you a return on your considerable investment. That’s because our research has found that celebrities in and of themselves do not drive sharing or boost business metrics.

Just putting a movie or film star into a video will not make your ad more successful, rather it’s the way the celeb can elicit an intense emotional response which builds memory structures. So our suggestions would be to focus on normal people, like this ad from Canadian airline Westjet – one of the most shared Xmas ads of all time.

There is a myth in video advertising that says that ads which are heavily branded are less likely to shared. But in reality there is there is no correlation between the amount of branding a video has and how many shares it attracts.  So be proud of your brand.

If viewers don’t know who made the video, they can’t create a connection between the emotions they are feeling and your brand. Low levels of branding can also confuse viewers, who know they are watching an ad but have to spend time trying to figure out who created it rather than feeling the emotions the brand wants them to.

For example, this 2015 ad from Cadbury had a strong brand recall of 95%, well above the UK average of 75%. It also elicited strong feelings of happiness from viewers, while a good percentage also said they would buy the product (56%).

Compare this to John Lewis and Sainsbury’s ads, which only achieved average brand recall scores of around 75%.

Want to find out more about video advertising strategies for the festive period? Visit our Future Video Lab for deep insights and some cheeky mince pies!